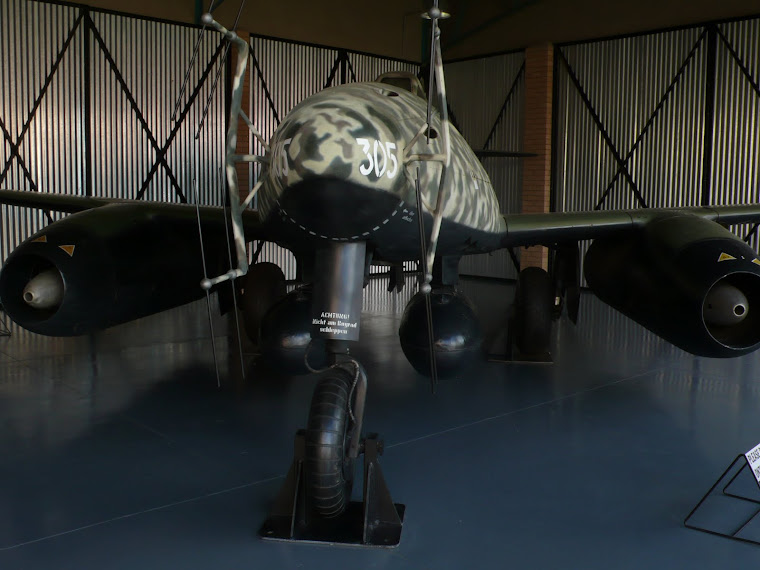 Two recently sold photographs of German aircrafts collected to be scrapped confirm the identity of this rather uniquely camouflaged Junkers 88G-6 of 6./NJG2, 4R+EP as Werknummer 620507. We are able to track a few stations of 620507 “career”: Abnahmeflug, approval flight, on September 25th 1944 at Bernburg, with II./NJG2 in January and February 1945, suffering 20% damage during landing at Mainz Finthen returning from a sortie the night of February 13th to 14th, and finally, captured at the end of the war at Leithorst Fritzlar where below photographs were taken. 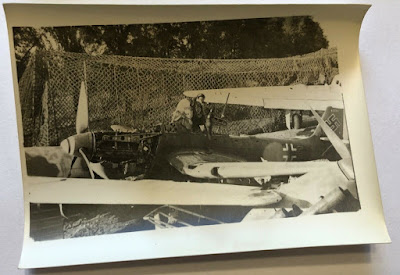 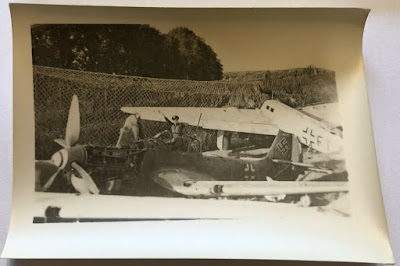 While I am not aware of photographs that show without doubt both, Werknummer and unit markings, other documents equally provide very strong evidence that 620507 was 4R+EP. The General Quartiermeister loss report of March 11th 1945 lists 620507 as 20% damaged on February 14th at Mainz Finthen. With the same date, 4R+EP is documented in flight logs of Robert Lüddeke and his crew. For the night of February 13th / 14th, the RAF main targets were Böhlen and Dresden. According to the OKL morning report of February 14th, three night fighters were deployed under the orders of Jafü Mittelrhein - senior signals officer middle Rhine. Oberfeldwebel Lüddeke and his crew members Kurt Wacker and Ulrich Hess with 6./NJG2 was one of those. They took off from Mainz Finthen at 20:56 hours and returned in the early hours of the 14th. Kurt Wacker reported that flight with 4R+EP in his flight log adding the comment “Bauchlandung", belly landing. The Gen.QuM loss report describes the incident with “Fahrwerkschaden” or landing gear damage, leaving it open whether this captures the cause or the outcome. The aircraft suffered said minor damage and the crew remained uninjured and the morning report completely omitted or failed to mention the accident.

The later stations of 4R+EP from Mainz Finthen to Fritzlar are unknown; although the above mentioned complete flight logs may contain more information. Other II./NJG2 logs show that the II. Gruppe operational base moved from Mainz Finthen by mid March to Illesheim and, by the end of March to Pocking.

Through the February accident the aircraft very likely suffered damage to its Jumo engines and its nose. Photographs taken at Fritzlar after its capture show that it had a replacement starboard engine - discernible by its factory applied RLM 71 surface color. Also the nose section which caries the aircraft’s individual letter “E" has a color application that is distinctly lighter and clearly different from the RLM 76 application to the forward fuselage. The port engine’s spinner has apparently received an over-spraying in what appears to be white or very light RLM 76, although it is unclear when this was applied, below and Janowicz, 2005, p.81. Noteworthy are also the white tips fo the lower radar struts, and that the starboard engine spinner and flame dampers are missing in all Fritzlar photographs. 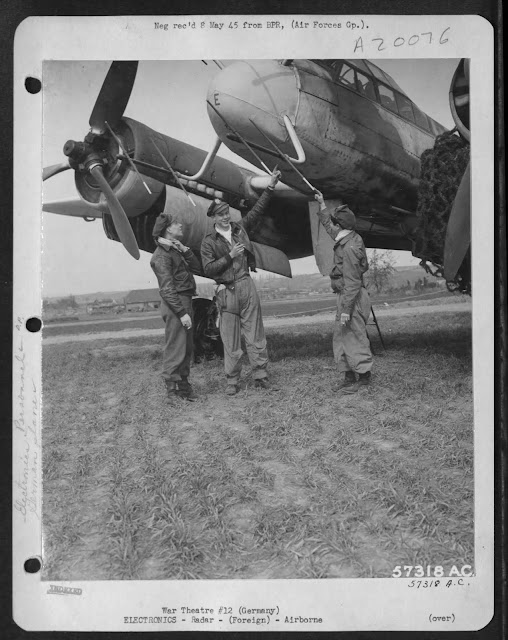 The most distinct feature of 4R+EP are wide, dark colored bands diagonally applied to fuselage and vertical tail over a standard RLM 75 grey violet mottles over RLM 76 light blue camouflage with a front to back, top to bottom direction. Photographs prove that the bands are applied in the same fashion on both sides, Janowicz, 2005, Williams, 2005, p.167 and below, and as a likely consequence are joint at the upper fuselage. A still from a film shot by US Forces reveals that the upper surfaces of wings and horizontal tail planes had large patches of darker color with only small surrounding areas in RLM 76. The still below indicates that this color scheme rendered the aircraft much less standing out from the ground than a lighter colored object. Why this singular aircraft received this unique scheme for better protection from detection has to be subject to speculation. Similar to another 6./NJG2 Junkers 88 G-6, Werknummer 622126 4R+PP, the unit markings were in RLM 77 grey. 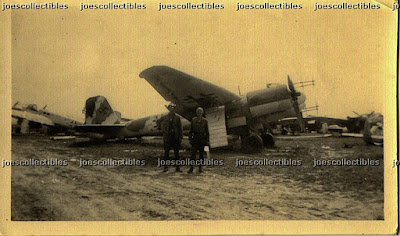 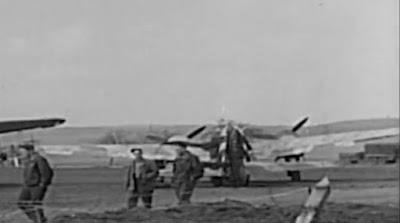 Image #7: source still from German Aircraft at Abandoned Airfield in Germany After End of World war II in Europe

A topic of much passionate debate among Luftwaffe researchers and modelers is which colors were applied, and how did they actually look like. Black and white photographs make it very difficult to identify a specific color with certainty. And even in the case of 4R+EP, where color film material exists, the task is not easier. Images #5, 7 and 8 show a contrast difference between the port engine cowling and the bands. This appears to be supported by images #1 and 2 with regard to the camouflage color applied to the Junkers 87 next to our aircraft in comparison to the visible bands on fuselage and tail. Jumo power eggs wore factory applied RLM 71 dark green. Gaemperle, 2011, p.14 assumes that the same color together with RLM 70 was applied to the Junkers 87. Given that reference, the color of the bands is clearly lighter than RLM 71 - or RLM 70 which is even darker than RLM 71. The still from the color film in my perception shows the forward fuselage band with a hue of green rather than brown or grey. This would make RLM 82 more likely than RLM 74 grey green or RLM 81 dark brown or brown violet depending on the author. Another factor of how colors appeared in reality and on photographs is how they were applied. Image #5 appears to show a slightly darker border delineation of the band, an indication that paint was more densely applied there, as well as some darker patches throughout the band. These darker border can also be discerned in the photograph published in Williams, 2005 and Janowicz, 2005. 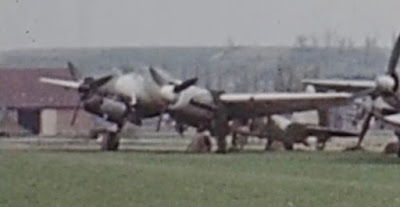 The final still shows the subject aircraft furthest to the left and lined up with Junkers 88 G-1 and Messerschmitt Bf 110 G-4 at Leithorst Fritzlar. The links to the films shot at Fritzlar have been researched and posted by Martin Trnkus of the Luftwaffe Research Group, https://luftwaffe-research-group.org/threads/fritzlar-leithorst-fritzlar-nord-notlandeplatz.4062/page-4., see post #78.

Posted by luft.hanseatic at 10:41 AM No comments: 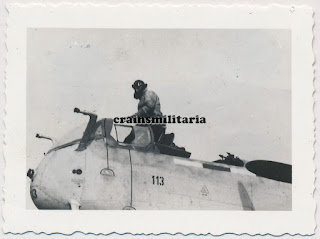 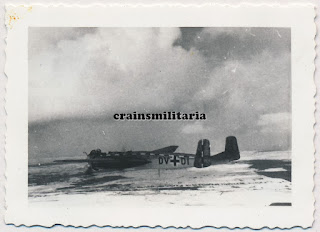 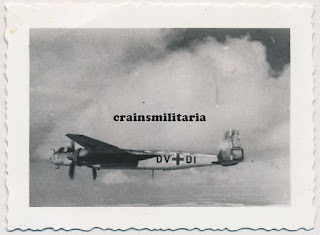 Above set of photographs, recently sold at eBay, depicts one of the Heinkel 219 used for ejection seat test at the Erprobungsstelle Rechlin. Photo #1 has previously been published. Although the same appears true for the others, closer examination reveals differences. Presumably, all in-flight photos are stills from films produced during the tests. Above photographs show rather distinct cloud formations and the ground appears as if covered in snow. In photo #3 the shadow from the wing appears right beneath indicating the sun high in the sky. Photographs published in modell magazin and by Ron Ferguson show the wing throwing its shadow backwards on the fuselage, partially covering the markings, thus indicating an early morning or late afternoon flight time.

This Heinkel 219 with the Stammkennzeichen DV+DI was Werknummer 190113. The last three numbers can be seen in photo #1 beneath the cockpit and at the nose. Ron Ferguson, p. 21, identifies this aircraft as an A-0 series, to be precise as A-042. In his Research Paper he also argues that its assigned Versuchmuster number was V19, p. 79.

E5, the department of Erprobungsstelle Rechlin responsible for testing aircraft equipment carried out ejection seat test with Heinkel 219 during the period October 1943 to June 1944. The summary of these tests resulted in a report dating from August 3 1944. The Heinkel 219 aircraft documented in these tests are Heinkel 219 V6 DH+PV, Werknummer 190006 and the above DV+DI. If the flight log of Joachim Eisermann, Oberleutnant with E'Stelle Rechlin, is any indication, then flight tests started on 29 October 1943, when he notes for his first flight in DH+PV “start of ejection seat tests”.

From Eisermann’s log, DV+DI was only part of the test program from February 23rd to May 6th 1944: the former date illustrates when he first transferred DV+DI from Heinkel’s production facility at Vienna-Schwechat, and the latter documents when he returned the aircraft back there. The majority of Eisermann’s test flights in DV+DI took place at Udetfeld, an airfield in Upper Silesia, between end of February and March 23rd, see below’s page from J. Eisermann’s flight log. Later, the aircraft was on several occasions used for tests at Rechlin. 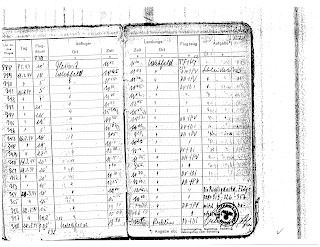 Joachim Eisermann worked after the war of VFW Fokker and wrote about his experiences for the in-house magazine (reprinted in modell magazin 02/1979). Challenges during the tests included the ejected seat hitting his tail plane - flight in Heinkel 219 V6 on November 1943 - irregular and completely unpredictable trajectories of the ejected seat and an opening of the seat’s parachute while still attached to the aircraft. In the latter instance a disastrous outcome was only averted through Eisermann’s unperturbed reaction to turn the aircraft during its steep descent to deflate the parachute.
Eisermann piloted Heinkel 219 V6 on May 19th 1944 when with Wilhelm Buss, a parachutist assigned to E'Stelle Rechlin, a person replaced the test dummy and was ejected at 1200m alt. at 310km/h. After two more successful tests with Wilhelm Buss on June 12th and 13th, the system was approved and went into production according to Remp, p. 62. This timeline is however at odds with other information according to which Heinkel 219 production with ejection seats started earlier. The first operational usage of an ejection seat in the Heinkel 219 occurred the night of April 11th to 12th 1944 when the pilot Uffz. Herter and his radio operator Gefr. Prebix were forced to use their ejection seats after their Heinkel 219 190073 was shot down by a RAF night fighter of the 239 Sqn., Ferguson, p.107. At least two other operational emergency ejection occurrences are documented before June 13th.

Back to DV+DI, the aircraft appears to carry the standard camouflage of RLM76 with RLM75 applied in dapples. The Stammkennzeichen is also applied under the wings as seen in photo #3. Modifications for the tests include the removal of the SN-2 FuG220 antennas, although the brackets were retained. It appears that the radar equipment remained on board, Buss report quoted in Remp, p.60. The rear parts of the canopy are removed, as well as the fame dampers on the engines. For higher precision measurement of the seat trajectory, a red and white striped band was applied horizontally on the fuselage, and vertically on the vertical tail fin. The latter partially covers the Hakenkreuz.

Posted by luft.hanseatic at 11:46 AM No comments:

Email ThisBlogThis!Share to TwitterShare to FacebookShare to Pinterest
Labels: E'Stelle Rechlin, He 219 A-0, Joachim Eisermann

The Satellite Field Brunnthal and its Aircraft

In previous blogs, Junkers 88 G-6 at München Brunnthal and Junkers 88 G-6 of V./NJG2, I have discussed the Junkers 88 G-6 night fighters found at the Brunnthal scrap yard, and in particular those of V./NJG2. With about half of all more or less intact aircraft at the collection point individually identified, it is time to provide an analysis of the complete line-up. In most instances only one publication source is listed although for the majority of aircraft several photographic records exist and multiple views are documented. Uncertainties about Werknummer or unit association of individual aircraft are marked with an (*) and elaborated in the comment section.

I am very grateful to Scott Pinkowski for his permission to republish photographs taken by his grandfather, Jerry Pinkowski, who served with the 347th Ordnance Depot Company and whose devotion to photography has presented us with a considerable number of “Lost Images of WW2” which Scott has published on his website, including those of Brunnthal, lostimagesofww2.
This is work in progress. Other researchers may have drawn different conclusions, so this list will perhaps spark discussion and debate. 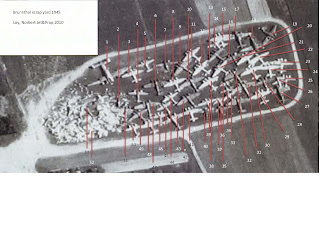 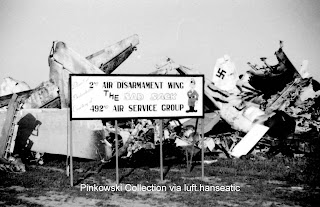 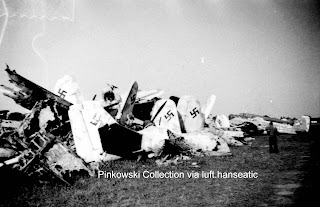 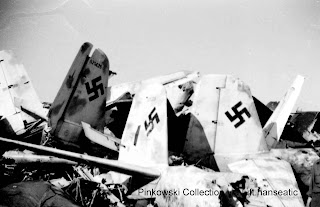 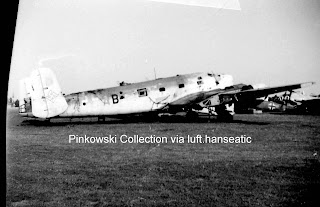 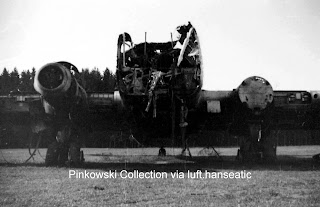 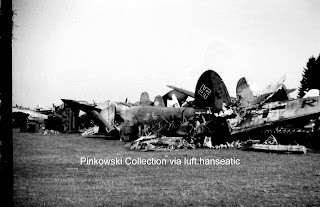 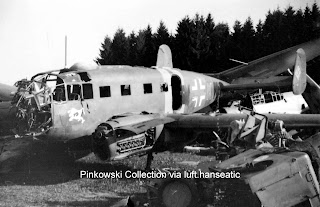 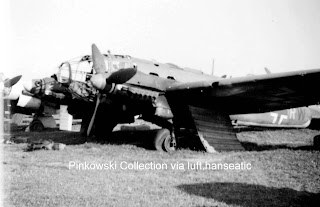 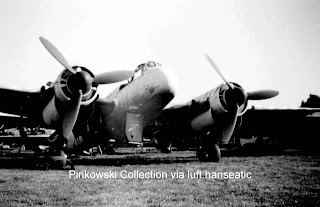 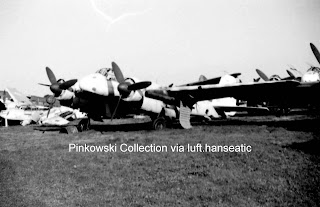 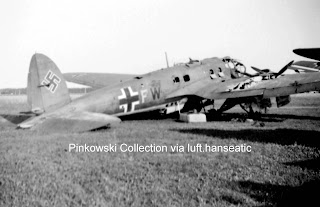 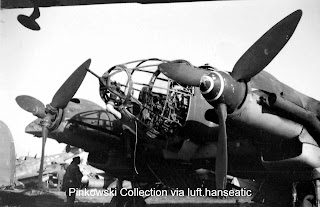 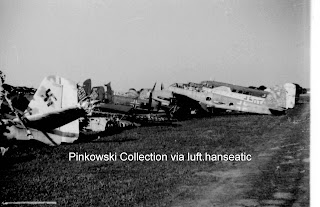 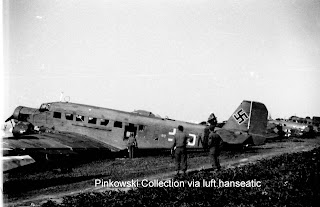 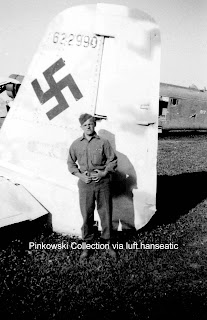 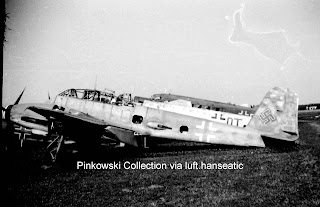 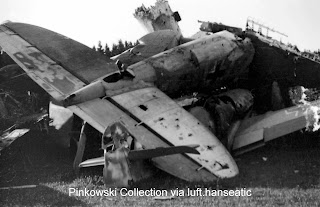 Proulx, Mark, 2012
Wings of the Black Cross, Number 9
Eagle Editions Ltd., Hamilton
Posted by luft.hanseatic at 11:52 AM No comments: